Last night, after a passionately penned response to Trump’s newest publicity stunt. With his currently planned “executive orders”. I was asked,”Could you be anymore dramatic?”

Those of you who know me personally know, although passionate- I am a lot of things but dramatic isn’t one of them.

The portion of the posed executive orders since there is more than one thought brewing in his (or who ever is puppeteering his plans.) But, the portion regarding the limiting of payroll tax for people making under 104k a year. In 2018, that 69.6% of American- almost 70% of Americans make less than 100k a year, with 22% making between 100-200k and just 8% making over that – this is the lumped in version of that but that is pretty staggering. So, 70% of Americans would qualify to have their payroll taxes go on “Holiday”…

Holiday- it is a beautiful word, it brings to mind either fun times and family gatherings or exciting Jaunts to the mountains, oceans or islands or a cruise to some exotic destination. But, Holiday here means – deferred…. it is deceptive at best to not just say deferred. I am not questioning anyone’s intelligence but deferred does NOT mean eliminated. It means stopped “until” – until what- sometime in the future at which the government seems safe for repayment. (I will return to this thought)

I was told last night many things, but essentially that I was ignorant, full of hate, brainwashed, pathetic and that Trump and his family have sacrificed so much including their pay for this country and the Democrats and liberals are liars and Obama divided this country. I received this from 3 or 4 woman who do not know me but who live in the State that I do, because this payroll tax “holiday” portents disaster…

So with the Cares Act, starting June 30th employers are able to defer their portion of their tax responsibility until the end of the year. Keep this in mind as you read further, the employer already can defer- it’s been agreed upon, with the responsibility to repay 50% before the end of 2021 and the rest in 2022. Trump’s executive order, implies that he will have the treasury stop withholding FICA taxes from the employees who make less than 104k a year. Reading and re-reading this mans words, as He says, “if re-elected, I plan to terminate these taxes.” The press and others feel this implies he is going to terminate FICA and this may be what he means, at this point I don’t know- what I do feel this implies though, this is coined in a way that is a double edge sword or a veiled threat. This deferment is a temporary flow into the pockets of the most needy Americans and a temporary flow of money into the economy- (essentially it also allows for more money in the pockets of the companies/corporations as well) with the corporate part of America these are monies that they are supposed to be budgeted for regardless of their financial state is the requirement of doing business. With people or individuals in this time of strife and need will provide on the high end an extra 250 dollars every two weeks(that will be taxed by the IRS) and this is for the people making the max 104k. So, if attached to a 12 month calendar that would be $6,448- before taxes at the 6.2% which is the employees portion of just the social security portion of their deductions.

So FICA is the tax dollars that feed the coffers of Social Security. If, from now until December 31, it is withheld from the employees that is from 807 to 950 billion dollars. Steven Mnuchin, says (at this point) that Social Security will continue to be funded by “Federal Funds” still our tax dollars- or loans from our “Allies” who are become few and far between. So- up to 950Billion dollars that Trump says “if he is re-elected he will Terminate.”

Terminate- This is where the double edge sword/veiled threat comes in. The GOP has been against Social Security, Medicare and Medicaid since it inception. In the near past they have done their damnedest to dismantle it or mar its inner workings calling it Arcane and “Entitlements”. Trying and achieving many alterations- including means testing, changes in eligibility and attempting to privatize the accounts. Trump reported from the beginning of his original campaign that he was the only candidate to not want to cut “Social Security or Medicare” now he wants to give a payroll tax “Holiday” for 70% of the Americans- at best 197 to 500 dollars a month. This is not a great deal of money from an individual stance but as a whole- it is enough if “terminated” will bankrupt Social Security and Medicare day one. If it is not “terminated” and these individuals that this small amount of income has “helped” will be required to be repaid- there is zero in writing in how that is planned and anyone who needs that money as it sits is not going to magically have the ability to repay it in 6 months or a year.

The House had a plan in place for a weeks and the Senate and White House would not agree and were stonewalling it, refusing to consider what was agreed upon in a bipartisan manner. The WH was waiting for the moment to take the position that the Democrats were asking for too much and/or not enough- to use this opportunity to attempt to regain his popularity and demonize the Democrats. Now he actively using the pandemic as a platform for his campaign, in the absence of strategy to actually fight a virus who has killed more than 162,000 Americans.

Trump, literally has no right to reallocate funds, the executive branch of this country does not have Constitutional power to control the allocation of tax dollors. If this tax holiday goes into effect and IF he is re-elected and able to “terminate” these taxes, he will literally have destroyed the infrastructure of our Government and the safety net of millions of people whom have already paid into the system- setting the precedent that House has relinquished it rights to control allocation of money in our government and that HE has the supreme power and is able to overrule everything that Congress says with the swipe of his pen.

I could go on and on- but it boils down to two veiled words “Holiday” and “Terminate”. We have a “leader” who purports that only he can fix America, with his actions we have become far from “fixed” if this proceeds as he proposes we will potentially loose the safety net of millions and the system that has been paid into by all of our retirement age individuals, many of whom if Social Security goes belly up will have absolutely no resources. This isn’t their safety net- this isn’t their “entitlements” it is their lives. If it does not bankrupt Social Security, Medicaid and Medicare the people who file taxes next year are potentially going to be left with a bill from the Government that they will be paying back with interest for years to come.

THOUGHT FOR THE DAY!

The government is no longer of the people and for the people…. and until it is put back into that formulation we will continue down this rabbit hole and the rich will get richer and the poor poorer.

The people following the “leaders” both democrat and republican and think they are working for them do not understand that unless we elect people who truly want reform- we will not improve. This Is at every level of the government not just about the president. This isn’t about Trump, Biden or Bernie- it is about true down and dirty change.

When we talk about social reform – for the police, the schools, and healthcare people become defensive because of what they have been taught to believe or think they know about how things should work.

“We the People” now work for the royal we, the government… we pay THEM to keep us subservient and “in our place” and we pay to stock pile weapons and the military (not take care of our military mind you) and we pay billions upon billions of dollars to keep the rich, rich and make them richer. The intent was that the government would work for “We the People” but we strayed from that path along the way due to greed of those who isolated the power and wealth to a few at the detriment of the many.

Our taxes should be going to make the country better – people are convinced that health care for all will be the end of our country and slip us into a socialist society and that if it is put in place they will pay more money and lose more coverage. They are constantly barraged with false scenarios of scarcity and wait times by those that stand to gain the most in the current mode. We the people do not understanding what we are paying for now in private coverage today is greater than what our taxes would be to make healthcare a right and public nationwide. Too many of we the people have lost the theme of help thy neighbor, so they don’t want their taxes going to help the poor “They (the poor) should try harder” and feel that we already do far too much for those less fortunate even as the government has steadily eroded our social safety nets for years through cuts in Medicare, Medicaid, Social Security and every other program designed to feed, shelter or assist we the people.

We are failing as a society because the government has convinced us that if we work harder and smarter we to can be part of that 1%… where all they are doing is attempting to keep people who are down down- and make more people for the “working class” and between the attempts to control a woman’s body and racism – they even have the church and white supremacist convinced to do their dirty work.

Real change is required in our society and our government or “We the People” will be redefined as “We the Rich” and the “People” will be expendable as evidenced by the current push to open the economy. 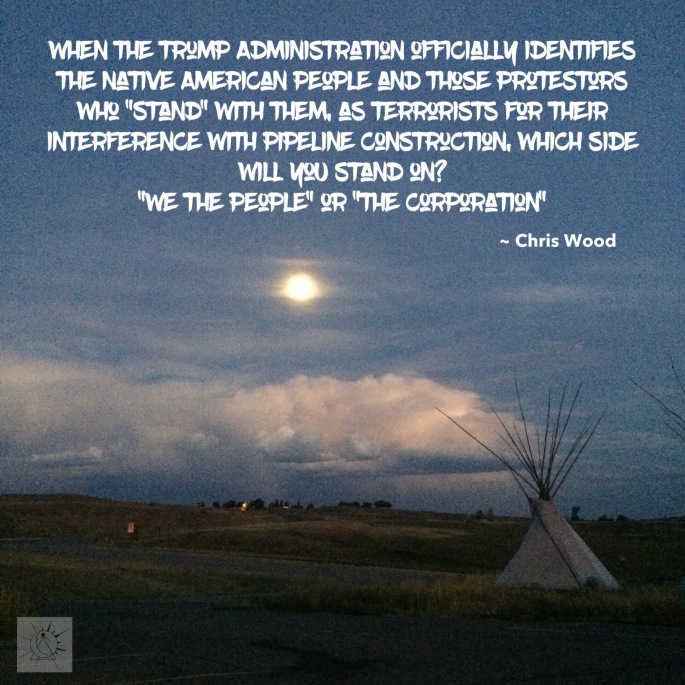 When the Trump Administration officially identifies the Native American People and those Protestors who “Stand” with them, as Terrorists for their interference with pipeline construction, which side will you stand on? “We The People” or “The Corporation”?